On my way home from work today I listened to Triple J’s ‘Hack’ , and heard an interview with an American about survival schools and torture.  The aim of the survival schools is to equip specialized troops to cope with torture by torturing them, thus reducing fear of the unknown.  His comments on torture laws in America shocked me.  Torture is defined as the intent to cause someone grievous harm, and if mental, must cause prolonged harm.  The issue is the word “intent”.  If the intent is to obtain information, it is not considered torture in an illegal sense.  I find that disturbing.  How far can one degrade and deeply abuse another before the legal system comes to the defense of the victim?  The attitudes underlying decrees such as this shed ominous light on the recent declaration by David Hicks that he was not tortured while in Guantanamo Bay.  Is his comment a true reflection of his treatment, or merely in line with the US definition?   It is hard to believe that a Christian nation can justify torture of God’s own reflected image in the name of information gathering.

The phrase “Aussie battler” is one that is deeply entrenched in the Australian psyche – it captures the struggles of life surviving and even flourishing against incredible odds, a fair enough picture of our early settlement history where the term originated. It is applied particularly to people slaving away at horrible jobs for next to nothing to make ends meet. Barely. It is a title of endearment that bolsters the solidarity of those considered the underclass. Introducing today’s Aussie battler. Mr and Mrs Aussie Battler now have a a million dollar mortgage over the modestly large home nestled in a sought after suburban estate. They probably have two newish cars, a necessity as they both work full time, and Mr Battler juggles two jobs. The credit card is maxed to furnish the home theatre room to make the best use of the Foxtel subscription… Sunday afternoon is the only time Mr Battler gets to attack his driveway with the leaf blower while Mrs Battler is out for some retail therapy.  It sounds like a load of hyperbole, and I hope I am exaggerating a bit.  According to Clive Hamilton, co-author of Affluenza, there was a recent article in an Aussie newspaper featuring a forlorn couple wondering how they will manage their million dollar mortgage if interest rates go up.   They were labelled Aussie battlers.   Clive Hamilton was interviewed by Sydney radio station FM103.2  , you can find the link to the interview here  (thanks for the tip Andrew!).   Sounds like a case of “affluenza” to me rather than a victim of old fashioned aussie battling.  Or at least it is a self-inflicted battle.  The fact of the matter is we are all caught up in a cycle where we never have enough.  We are conditioned to want more.  We are skilled at justifying our desires, even feeling hard done by if we don’t have what we think we should.  This state is irrespective of social status.  If we are “poor” we want more.  If we are “rich” we want more.  Somehow we forget that we are in the richest 2% of the world.  Poor us. 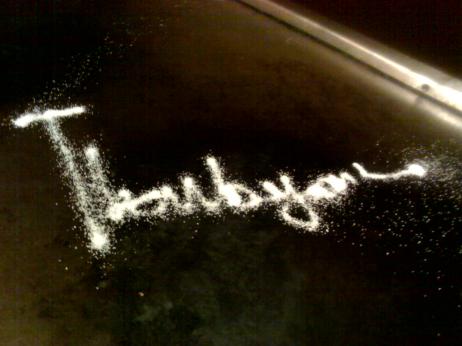 This is my second ever post about food.  Like the first, it is about Japanese cuisine. I have been in Bendigo for the the last few days, and on Tuesday night I went out for dinner to My Teppanyaki, a Japanese restaurant where all the food is cooked on a fiery hot plate in front of you.  The first two courses are received with little fanfare (a warming bowl of miso soup and a simple but cleansing salad of lettuce and carrot).  Next came a small clay bottle of sake, Japanese rice wine.  This was my first try of sake, in  a tiny clay bowl.  It is an interesting taste.  Oddly comforting, in a similar way to jasmine tea at a Chinese restaurant.  Just with a little more kick.  And warm.  I am not accustomed to warm alcohol.  I decided to take this unknown beverage slowly.  We had a chef all to ourselves.  Scrapers and knives flourished through the air, as the food was rigorously prepared and cooked before us.  The shelling and deveining of the prawns (a grotesque job at the best of times) was poetry in motion.  The prawns were void of their less appertising parts in less time than it usually takes me to remove the head of just one.  One wonders how many prawns perished in the mastering of this deft knife maneuver.   The other standout part of the meal was the preparation of the eggs for fried rice.  Somehow the chef formed a long tube of fried egg, and then with scrapers a blur, he attacked the egg with what looked like a series of karate chops.  The assaulted egg flew through the air and landed scattered about the rice.  At the end we cupped our hands Oliver Twist style and prayed for accuracy on the part of our chef.  The bowls were tossed into our hands from over a meter away.  To top it off, the chef thanked us in salt, writing upside down.  An amazing experience.  The food itself was more like the added bonus.  It was of course scrumptious.